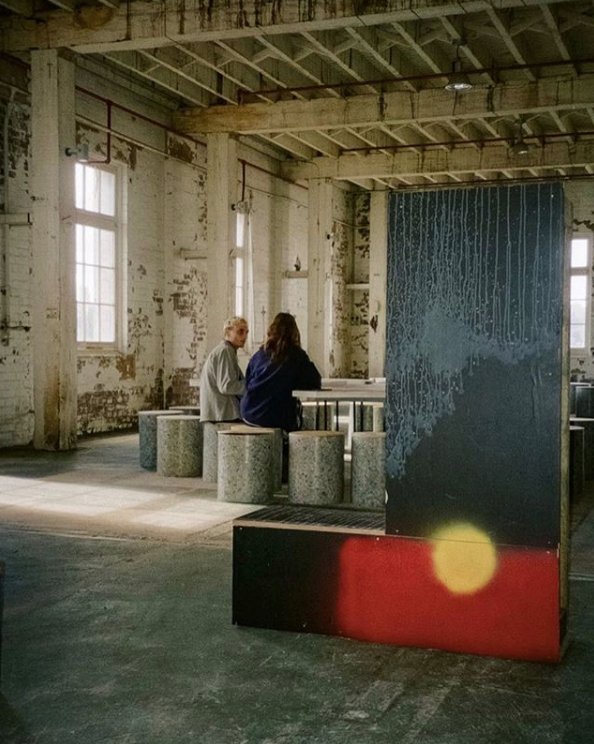 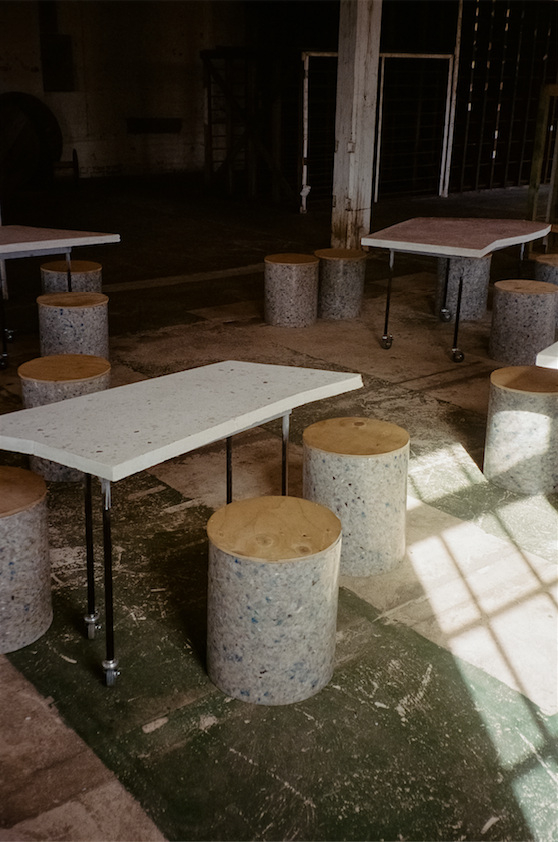 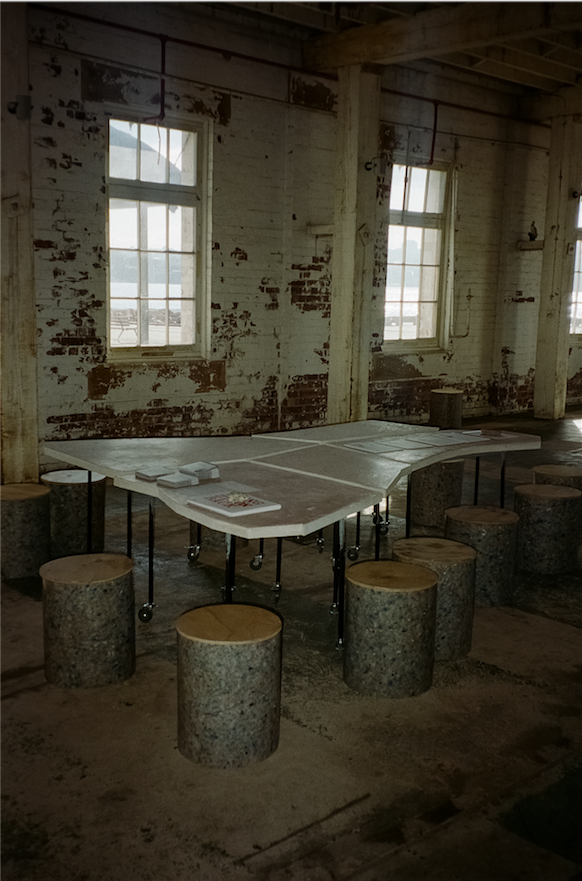 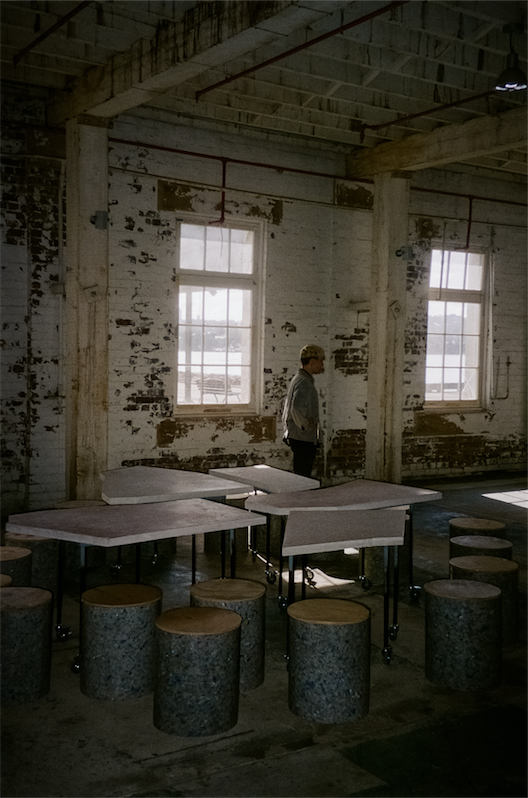 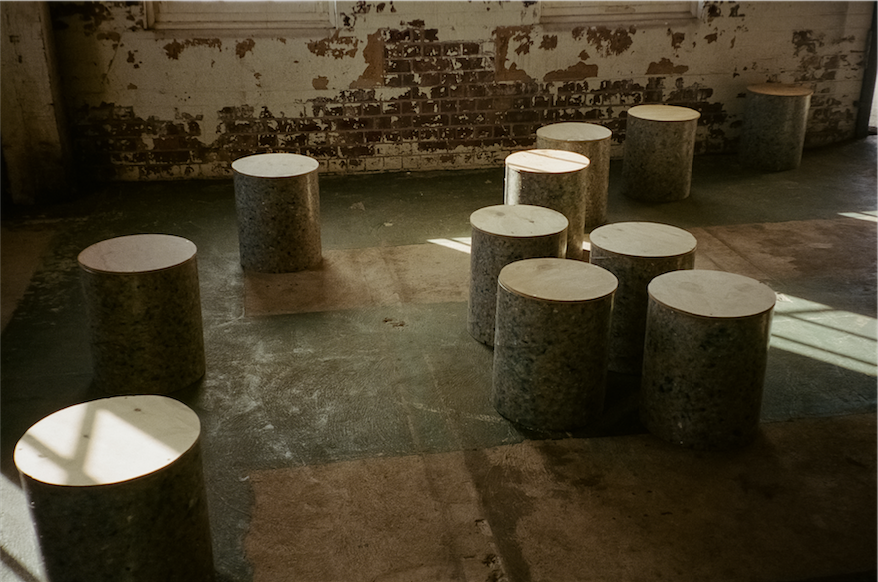 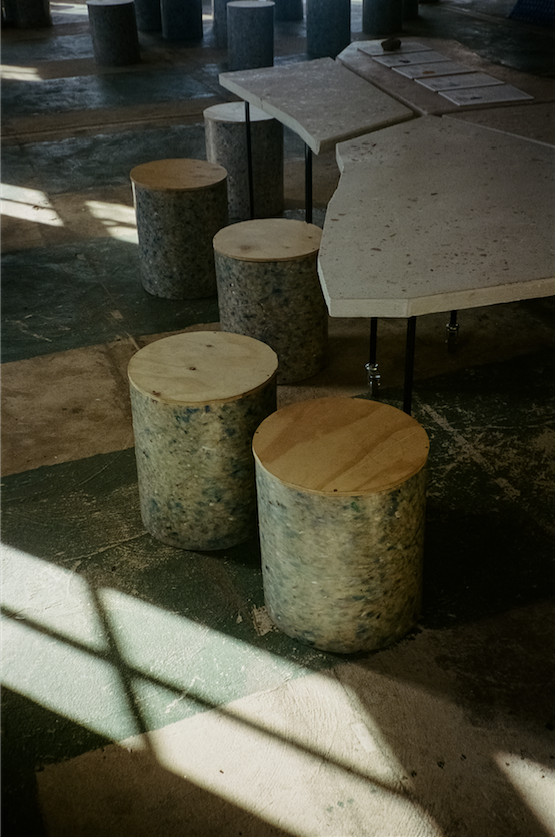 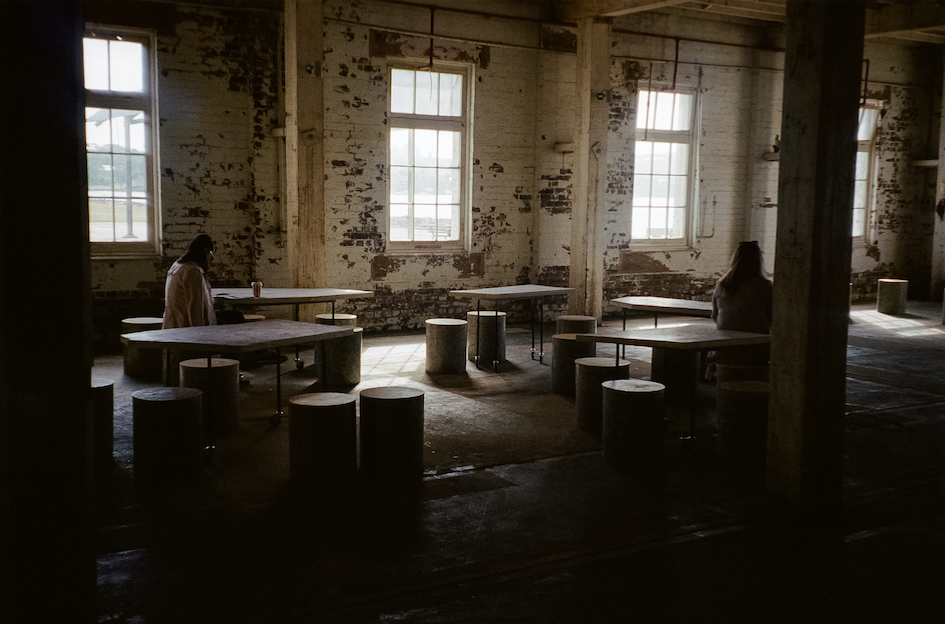 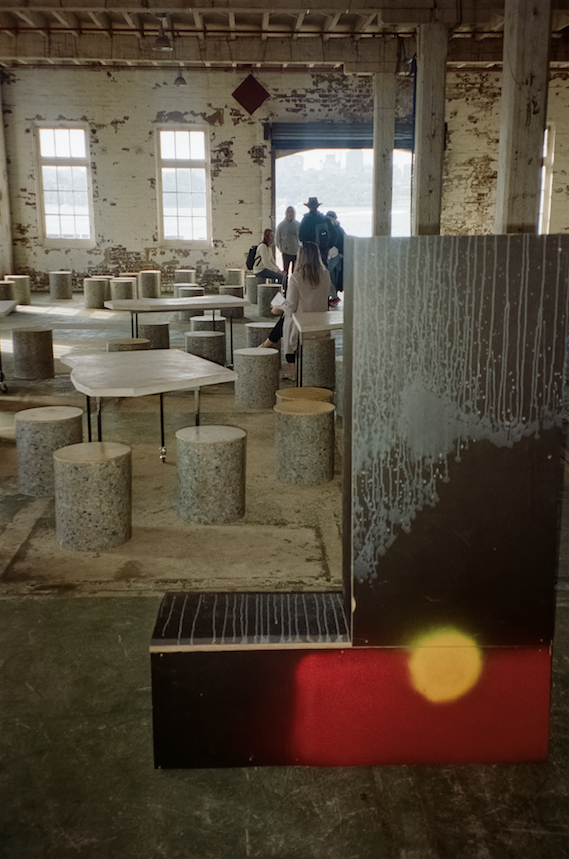 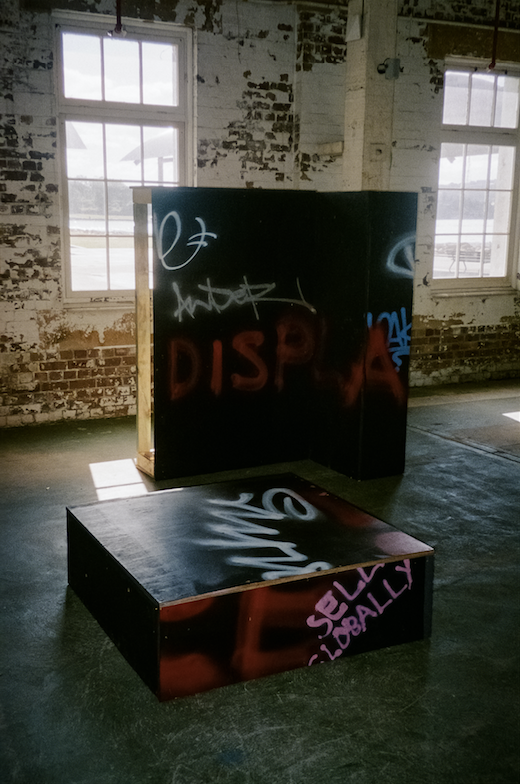 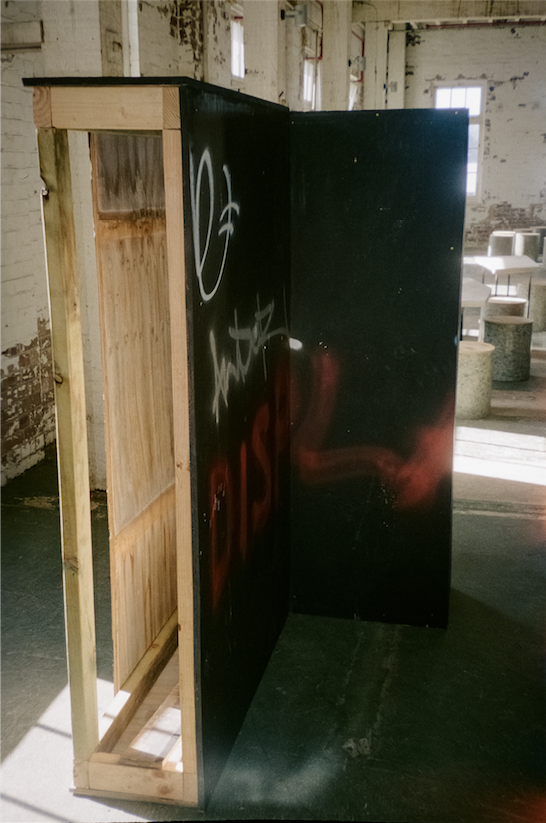 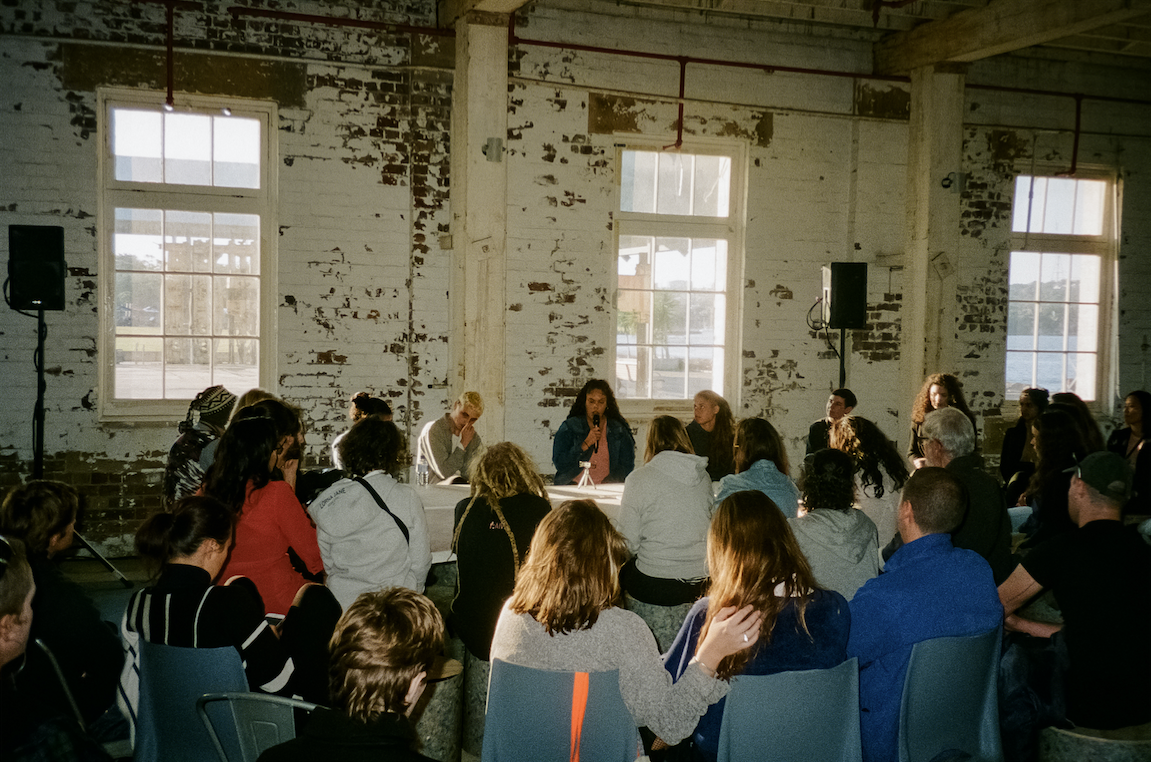 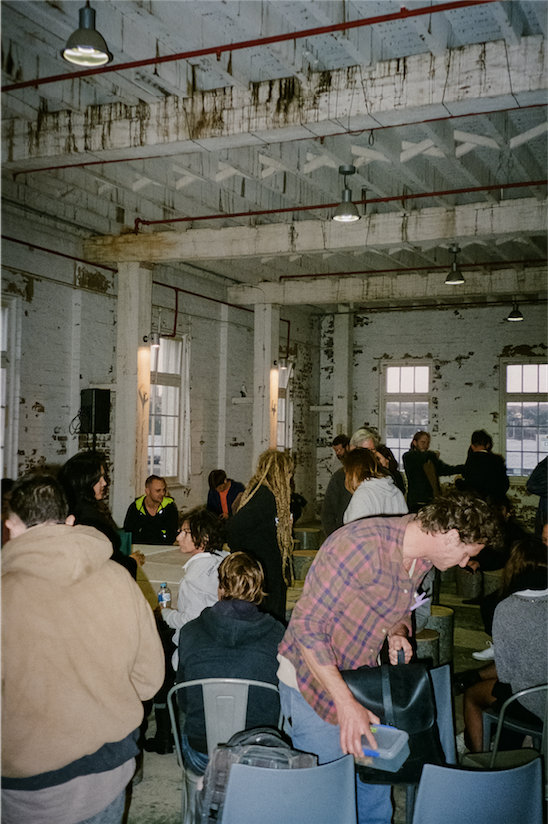 “Superposition Studio, designed by Future Method, makes a strong point through an artefact. Several tables, which when combined take the shape of Cockatoo Island, have “terrazzo” tops made from Redfern demolition rubble set in a binder and the surface smoothed. It sums up the way colonisers destroy an Indigenous culture and try to absorb its remnants by making over the past – building, rebuilding, developing – to accord with each new version of their still colonial selves.”

This work, commissioned for the 2018 Biennale of Sydney, is an adaptable, recycled and recyclable installation composed of three parts; the communal ‘Terrazzo’ table for meals, discussions and workshops; the ‘Welcome’ space that greets people as they arrive on the island and as a meeting spot for tours; the rest space, a fun and comfortable place to lie down, play with kids, have quiet chat and for informal workshops.

For the table we collected rubble from demolition sites in Redfern, The Block, the Rachel Foster Hospital and the Waterloo Metro site. We crushed it up as aggregate and made a kind of ‘Terrazzo’ table in the shape of a Pre-Invasion Cockatoo Island. The table is composed of 5 parts on wheels that can be split apart and used in a variety of ways.

For the ‘Welcome’ space we took graffitied hoarding from building sights in the neighbourhood that we then made into large furniture pieces. They acted as seat, art wall, and space divider.

Hung from the large timber beams of the Naval Store were old scaffold mesh that were used as space dividers with inbuilt pockets for artwork and collected artefacts that the Biennale artists would bring in. Behind them was the rest space with its big snake sofa made from recycled drop sheets.

As part of this project we also hosted a discussion about Displacement driven by gentrification in Redfern with Lorna Munro, Linda Kennedy, Keg De-Souza and hosted by Joel Sherwood-Spring. It was an honour for us to have members of our Redfern community to also come and be a part of this discussion with us. Redfern is the crucible of Aboriginal Self Determination and Political Activism and has always been a significant place for their community. Gentrification has forced them out and large scale State Government Urban Renewal projects have moved in and are turning over this soil once again for profit.