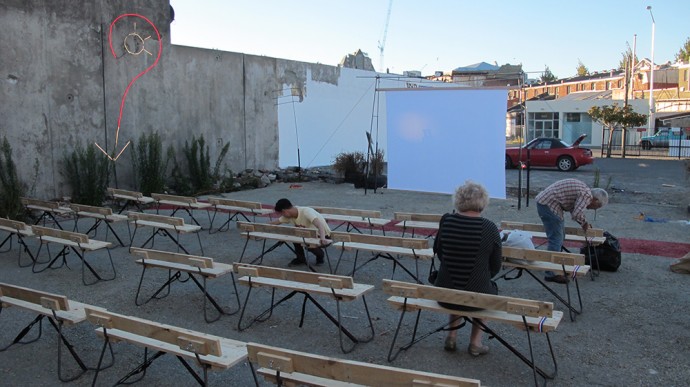 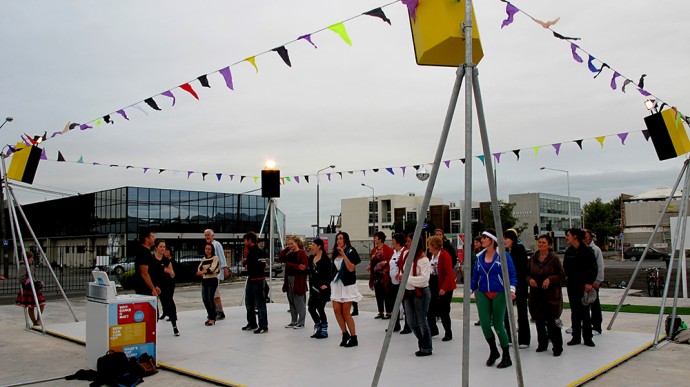 Between September 2011 and February 2012, Christchurch, New Zealand, was hit by two earthquakes. The first was an unnerving near miss – without any fatalities, a creative energy emerged amongst young architects, designers and activists inventing ways to fill in the gaps left on the main street. Gap Filler and other grassroots collectives emerged, redefining the city on their own terms. Built over rubble, the outdoor Dance-O-Mat was one of the first ‘transitional’ initiatives. With disco lighting strung on tall poles and a laundromat washing machine repurposed as a jukebox, the city had a place to dance, without any rules, to its own music.

But on February 22nd 2011, the second quake, with a death toll of 185, put a pall over any festive atmosphere. For the now almost flattened city centre, larger and more complex questions arose about what the city would or could become. The process of envisioning, planning and re-building was going to take time and interim solutions were sought to help stop a tide of rushed planning approvals and hasty construction. From this, a new building typology emerged; an architecture of impermanence, spontaneity and ingenuity.

Defining and celebrating this movement is a publication from Project Freerange, Christchurch: The Transitional City; and, the now annual Festival of Transitional Architecture (FESTA); a vehicle for ploughing the field of experimental and progressive approaches to urban renewal. At the creative heart of all this cultural production is Barnaby Bennett, founder of Project Freerange, author of Christchurch: The Transitional City and an instigator and key protagonist of FESTA.

I interviewed Barnaby about his work, life, career and Christchurch for Assemble Papers. Read all about it here.